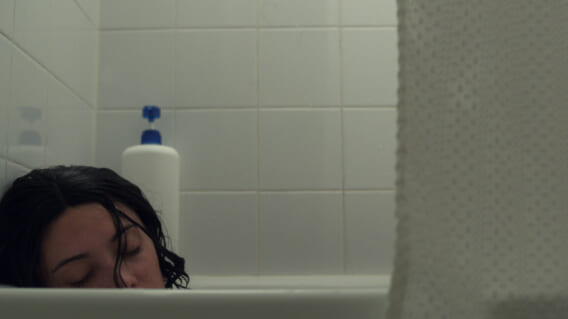 In early 2020 I started to highlight Latin American voices in horror. Whether it be from Argentina to Cuba to the United States, the attempt to bring those stories into more eyes has been my goal. On occasion, I find stories I highly resonate with. These films depict the struggles and experiences of being a Latine. Cookie Esté’s directorial debut short film Split Ends is exactly one of those narratives. It wonderfully weaves the themes of anticipatory grief, breaking free from family conditioning, and regaining agency in your life.

Split Ends focuses on Isa’s (Molly Hernández) internal struggle as she cuts off the majority of her hair with the help of her sister Clara (Daniella Pereira). The instant regret is noticeable. Isa must now live with her decision as she begins to see her freshly cut hair appear in her life in haunting ways. In between the horror sequences, she must prepare for the response of her Abuela who is diagnosed with dementia.

The Latine Perspective Behind Long Hair

Growing up in a Mexican household and marrying my Afro-Latine partner, all my life I have seen the power behind long straight hair by first-generation immigrants such as my parents, in-Laws, and ex-church members. When I think back to how these groups of people would praise long hair, specific memories spring into mind. It’s situations revolving around glorifying my sister’s hair. Or when the Mexican hairstylist always attempts to change my partner’s mind when it’s time for her monthly buzzcut. You could say the beauty standards tied to long hair in Latine cultures are suffocating. Estés perfectly depicts this in Split Ends.

Over the course of the short film, the strands of Isa’s embodied hair manage to sneak their way back into her life. It starts as a harmless occurrence that eventually turns deadly. While Split Ends heavily focuses on the drama between Isa’s internal struggles, the manifestations of her wound appear as horror scenarios. The situation is truly terrifying and manages to maintain powerful thematic imagery.

The evolution from harmless to harmful is correlated to how Latine beauty standards are initially presented as flattering comments. But these remarks from the older generations can develop into force-fed ideologies as they shove their beliefs down the throats of the younger generation during their adolescence. It can quickly become stifling and detrimental. Estés not only shows the Latine experience of struggling to adhere to these traditional beauty standards, but they combine the universal emotions of anticipatory grief and regret through impulsive decisions when all agency is lost.

Dementia is a touchy subject to me as my Abuela Politica (grandmother-in-law) was diagnosed with it. I witnessed how my partner and her family struggled with it. The same hardships are now carried over to my Abuelo who is battling the same disease and other complications. There’s a particular sense of anxiety that I get whenever I think about and talk to my Abuelo. Terror fills my body with each phone conversation. He repeats the same stories and I repeatedly have to remind him who he is talking to. The fear is then overtaken by hopelessness as there’s nothing I can do to help him.

This is the same feeling Isa is enduring at the beginning of the short film. With no real control over her Abuela’s dementia, the one aspect she does have agency over is her appearance. When the feeling of anticipatory grief becomes too drastic, Isa finally agrees to have it cut by her sister. This is when we get the first sequence of the film, a bittersweet moment of temporary relief and dopamine. Isa’s hurt smile is seen through the reflection of the mirror as she reflects on her impulsive decision.

The connection between anticipatory grief, fear, and loss of agency is prominent in almost every scene. This is strengthened by the multiple nuanced instances of the severity of Isa’s Abuela’s condition. The casual reminders of who is on the phone and what time of the day it is are just a few examples. The first conversation between Isa and her Abuela could have been taken straight out of one of the phone calls between my Abuelo and me. Finishing conversations like these can leave you feeling defeated and despaired which is what Hernández wonderfully portrays as Isa.

While the film builds up to the conversation between Isa and her Abuela, the climax steers into Isa’s internal struggle with fear and grief. She must confront herself before confronting her Abuela. Esté’s script of Isa’s emotional journey comes to a complete and satisfying arc. Match this with cinematographer Nicholas Emmanuele’s beautifully framed shots and the final product is an emotional self-reflecting sequence.

This is a personal story for Estes. But I do believe this film has something that many people can relate to. The multiple layers and subtext is perfectly weaved and crafted into a short film that centers around grief. As we continue to age and see our parents, mentors, Abuelos, and Abuelas get older the impulsive decisions are not too far away. If there are no harmful consequences to either themselves or others, this film shows it’s ok to indulge in these choices as long as you don’t lose yourself in the process.

Split Ends will be available to stream in Fall 2022. You can check out the teaser here.

Why Our Customers Trust Their Jewelry to Nunn Design Findings!

What Is Business Management