Over time, things change. This is hardly a hot take, and according to the late great Aristotle, time is nothing but the measurement of that change. Documenting skiing is exception to this idea. A Warren Miller film from 1980 is not the same thing as a production from 2020. Skiing has obviously progressed an incredible amount, but the movies and edits themselves have adapted too. The concentration, cinematography and overall artistic eye has entirely become its own game. Filmmakers and companies from across the ski world have honed in their skills and styles to create documentations far beyond the skiing in an attempt to capture the true beauty and lifestyle that goes in to being a skier. Perhaps there are few better examples of this than The Faction Collective. As a company and ski collective, Faction has earned a reputation for producing some of the highest quality flicks around.

From its immaculate full films, “The Collective” and “This is Home” to its arsenal of shorter, but equally awe-inspiring edits such as “Zermatt to Verbier” and “Sass Fee,” Faction clearly has a habit for creating works of art that document not only their incredible skiers, but the effort that they put into their craft and the lifestyles they live. “Utah to BC” is the latest installment of Faction’s dedication to high quality short flicks, and, boy, does it hold up to its reputation. With an infamous crew of Tim McChesney, Duncan Adams, Blake Wilson and Alex Hall, it’s easy to guess that the skiing in this flick is off the wall. Huge booters in the Utah backcountry allow the gang to strut their nutty tricks, and the playground that is British Columbia provides massive lines that are quickly put to work. Plus, as comes standard with any A-Hall shoot, the man can be seen getting cheeky on the most creative of tree rides.

In all, “Utah to BC” is another mark on Faction’s ever growing list of phenomenal content with overly impressive athletes. These boys each ride in their own unique style, which makes it so easy and enjoyable to watch. But while the skiing is obviously the focal point, how it is captured is the deal breaker. The edit was directed and edited by the talented Etienne Mérel, who can also be spotted behind the camera for both “This is Home” as well as “The Collective.” Clearly, Faction has a winning recipe when it comes to both cinematographers and riders, and I speak for the whole FREESKIER crew when I say that we hope they keep innovating while continuing to cook up ski film GOLD. 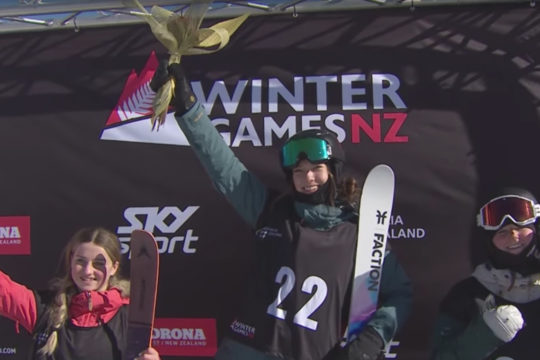