European fashion and luxury goods giant LVMH Moet Hennessy (OTC:LVMHF), which is currently involved in a prolonged and uncertain acquisition of Tiffany & Co. (NYSE:TIF), reported its third-quarter 2020 results earlier today. While still down from Q3 2019, according to the press release, the company’s metrics reveal a strong rebound in sales across most categories.

Organic revenue plunged 38% year over year in the second quarter but was only down 7% in Q3, showing the speed at which sales are returning. A breakdown of business activity by sector indicates LVMH is actually ahead of 2019 in its Fashion & Leather Goods segment, with a 12% revenue rise year over year. Wines & Spirits has almost recovered, with a 3% decline compared to 2019. 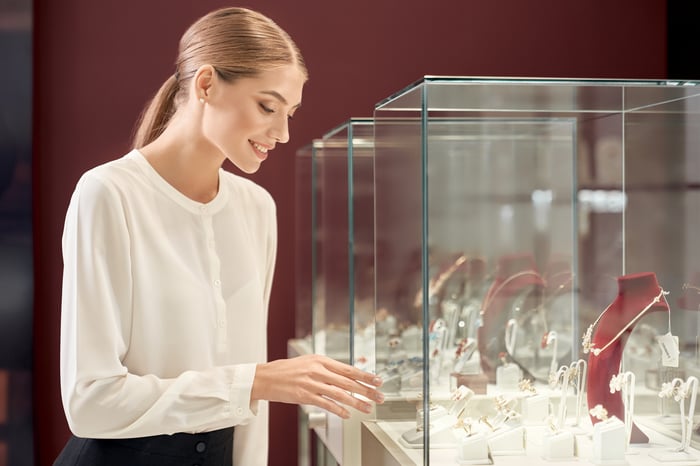 While Perfume & Cosmetics and Watches & Jewelry are still down 16% and 14%, respectively, from last year, these metrics are still a great improvement over Q2’s figures of a 40% and 52% revenue drop from 2019.

LVMH’s fortunes are recovering, but in the meantime, Moet Hennessy and Tiffany are busily hurling lawsuits at one another. Tiffany is suing LVMH for allegedly procrastinating in the hopes of backing out of the deal, while LVMH is suing Tiffany for allegedly lowering the value of its acquisition by mishandling its pandemic response.

Because of judicial fast-tracking, the trial is set for Jan. 5, 2021, though the judge is urging a settlement before then. According to Reuters reporting yesterday, sources say the European Commission will approve the acquisition with no antitrust action. LVMH may in fact intend to move ahead with the deal despite the legal scuffles, particularly since it mentions in today’s Q3 report that “nine of the ten required regulatory authorizations have already been obtained.”