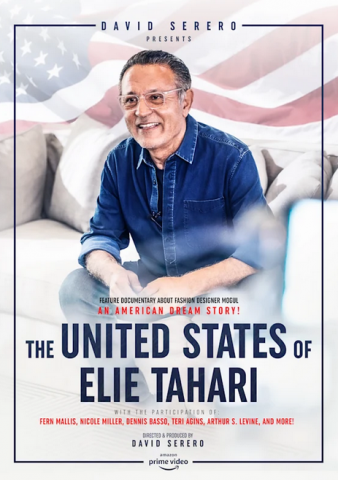 “The United States of Elie Tahari” is the first documentary ever produced about Elie Tahari, filmed during 2020. Directed & Produced by David Serero, this highly anticipated documentary tells the life of Elie Tahari from his birth and origins (born in Israel with Iranian parents) throughout all of his achievements and legacy. Part of the documentary is also dedicated to Tahari’s creative process and endurance in the fashion world. Several fashion personalities such as Fern Mallis (aka the Godmother of Fashion), Fashion designers Nicole Miller and Dennis Basso, Arthur S. Levine, WallStreet Journal Fashion Journalist Terri Agins, Instagram influencer Julia Kananovich, artist Lynna Davis, Disco music, models, Studio 54 and more, are part of this documentary, from which the trailer is released today.

“In this documentary, you’ll discover the whole inspiring story of Elie Tahari and his fashion world and process, as rarely shown before. David Serero added, “I want this film to be loved by fashion lovers and connoisseurs, as well as the ones who are not familiar with that important artistic environment. This documentary is educative, inspiring, and a celebration! You’ll feel joining a large party! said Serero. Elie Tahari is the definition of courage, determination, kindness, and…chutzpah! His parents fled Iran and moved to Israel, where he lived in a refugee camp Ma’Abarot’, then moved to New York without speaking English and has contributed to the New York fashion life for more than 40 years with his iconic and visionary signatures such as the Tube Top, the Woman Suit and more.”

The Official Trailer of “The United States of Elie Tahari” is available here: https://vimeo.com/501311580

For more than 40 years, Elie Tahari’s keen understanding of fashion and design has ensured him a unique position in the luxury world. The internationally-renowned brand has a global presence on five continents and is sold in over 600 stores in over 40 countries. The brand has expanded to include women’s shoes, sunglasses and accessories, and menswear and has come to define modern sophistication with the designers inspired collections of understated grace and elegance.

At the start of the 1970s, Elie Tahari emigrated from Israel to the United States and began working in New York City’s garment center while moonlighting at a boutique in Greenwich Village. After he succeeded in popularizing the tube top, Tahari began designing his eponymous label Tahari in 1973. In the following years, Elie Tahari opened his first boutique on Madison Avenue, posted the company’s first billboard in New York City, and held his first fashion show at Studio 54.

In the 1980s, Tahari expanded in the eighties, turning his attention to the tailored suit that helped define a decade. His first advertisements appeared in Vogue and Harper’s Bazaar.

In 1989 his first shop in Bloomingdales NYC opened, followed by Saks Fifth Avenue, and Tahari was named one of Crain’s most successful 40 under 40.

In the 1990s, Elie Tahari began the decade with his first cover of Women’s Wear Daily featuring a Tahari wool suit highlighted as the season’s trend and is admitted to the Council of Fashion Designers of America. The brand moves into new headquarters in the Grace building on West 42nd Street and is now carried by all major department stores. Tahari initiated a significant expansion campaign including licensing and international sales.

Television Networks also started to take notice of the brand with pieces from the collection being showcased on Ally McBeal, The X files and Will & Grace. Tahari was the featured designer in the annual Macy’s Passport fashion show in Los Angeles, which helps to raise over 2 million dollars for AIDS research, and was invited to the White House to meet with President Clinton. In 1997 Tahari became the founding partner and creative director of Theory and designed his own label.

The company continued its global expansion in Europe, Asia, and the Middle East and opened freestanding boutiques in Istanbul, Turkey, and Dubai, as well as US boutiques in Newport Beach, California, Washington, D.C., Dallas, and a pop-up store at 510 5th Avenue, named The Vault as well as the E-commerce site elietahari.com. To mark the brand’s 40th anniversary, Tahari created a capsule collection “Elie Tahari 1974,” which featured updated silhouettes from the brands four decades in fashion.

In 2020, he received the Pomegranate Award from the New York Sephardic Jewish Film Festival.

David Serero is a critically acclaimed and awards-winner opera singer, actor, director, and producer. He has performed more than 2,500 performances in more than 45 countries, directed and produced nearly 100 theatrical productions, starred in over 100 films and TV series, recorded and produced over 100 albums and, played more than 50 lead and title roles (in several languages) from the opera, theatre, and musical repertoire. In New York, he starred Off-Broadway as iconic roles such as Shylock, Cyrano, Othello, Barabas, Yiddish King Lear, Don Giovanni, Figaro, Romeo, Nabucco, as well as new works such as Napoleon by Kubrick, Queen Esther, Anne Frank a Musical, among others. In his native Paris, he also starred as Don Quixote (Man of La Mancha) and Happy Mac (Beggar’s Holiday by Duke Ellington). He entered the prestigious Who’s Who America for demonstrating outstanding achievements in the entertainment world and for the betterment of contemporary society. In 2019, he received the Albert Nelson Marquis Lifetime Achievement Award, the Morocco Day Distinguished Achievement Award, the Trophy of the Culture of Morocco, and named among the fifteen most influential Moroccans worldwide by Morocco’s airline Royal Air Maroc. David is a member of the Recording Academy and the Television Academy and a voting member of both the Grammys and Emmys. In 2020, David Serero received the Award for Diversity by the UNESCO in Paris and became an Honorary Member of the United Nations of Arts and Science. He has conducted over 1,000 interviews on his iHeart Radio show. He won the 2020 BroadwayWorld Awards for Best Performer of the decade, Best Producer of a Musical and of a Play of the decade.