The History of a Sensory Art Form 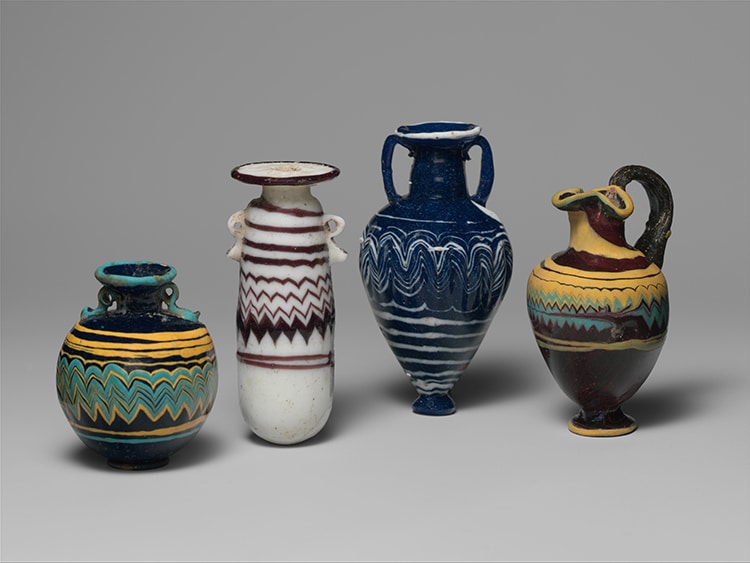 The history of scent is largely ephemeral. After all, the aromas of pressed lilies from the Nile banks or the precious ambergris, once worth more than gold, are hard to imagine if you’ve never smelled these rarities.

Read on to learn more about the artistic history of perfume bottles.

You might be surprised at the long history of perfume bottles. Scroll down to learn more about the artistic history of these vessels. 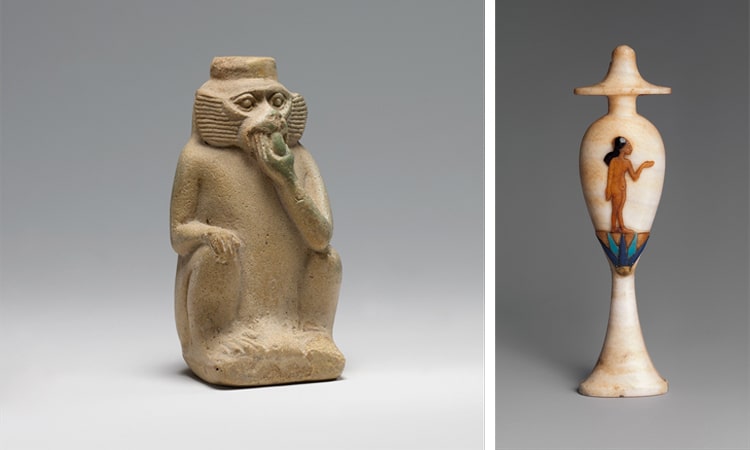 While the deliberate use of scents has existed for many thousands of years, some of the earliest distilled and mixed perfumes appeared in ancient Mesopotamia, India, and China. Of the surviving purpose-made vessels for perfume, ancient Egyptian examples date back to at least the Middle Kingdom.

The Egyptians had both religious and cosmetic uses for perfumes. These perfumes were famous around the ancient Mediterranean and exported as part of regional trade. Common ingredients included lilies, cardamom, cinnamon, and myrrh.

Ancient Egyptian perfume bottles were delicate and beautifully crafted as symbolic vessels for the wealthy to keep with their personal cosmetics. These vessels could be carved from stones such as travertine marble or molded from faience (a type of ceramic used in luxury items). Colorful glass was another material frequently used for cosmetic and perfume vessels in ancient Egypt. They were crafted via a process called core-forming, in which a soft form is dipped in molten glass at the end of a rod. Once the glass hardens in the shape of the form, the soft interior form is scraped out to create a hollow vessel. 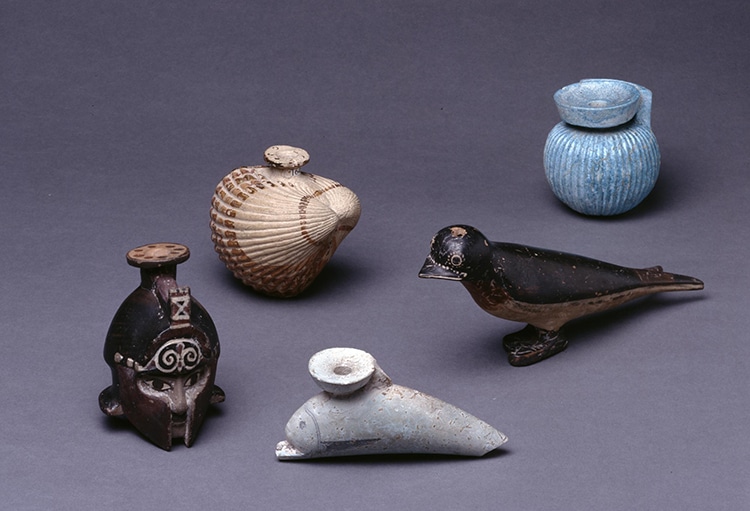 This ancient glassmaking process developed in Mesopotamia and spread westward to Egypt. The artisans of 18th Dynasty Egypt (the period from 1549 to 1292 BCE) were renowned for their exquisite core-form works, often featuring striped patterns in rich colors. This style of glassmaking spread to Classical Greece. Known as alabastrons, these perfume bottles could be shaped like vials or like amphorae. Faience and terra-cotta were also used in ancient Greece. Exquisite shapes from shells to birds display the variety of vessels available for those who could afford luxurious scents and fine craftsmanship.

The Invention of Blowing Glass

Two Roman blown glass perfume bottles, both from the 1st century CE. The left features a white trail of wound glass, the right is a single color example. (Photos: The Metropolitan Museum of Art, Public domain)

The core-formed vessel was eventually phased out by the invention of blowing glass. Syrian artists developed the process around the 1st century BCE. From there, like core-forming, the technology spread to the rapidly expanding Roman Empire. By most accounts, upper-class Romans were perfume-enthusiasts, anointing from their hair to their feet. This fashion for scents was viewed by some as a moral failing. Pliny the Elder wrote, “Perfumes serve the purpose of the most superfluous of all forms of luxury; for pearls and jewels do nevertheless pass to the wearer’s heir, and clothes last for some time, but ingredients lose their scent at once, and die in the very hour when they are used… All that money is paid for a pleasure enjoyed by someone else, for a person carrying scent about himself does not smell it himself.”

Whether a moral failing of the Romans or not, a fashion for perfumes required large-scale production of perfume bottles. Blown glass opened a new art form. More translucent and faster to produce than core-formed or cast glass, glassblowing encouraged a rapidly growing, ever-creative industry within the Empire. The Romans used glass for tableware, jewelry, and of course cosmetic containers. Besides the beauty of these blown glass perfume bottles, they were non-porous and relatively affordable. 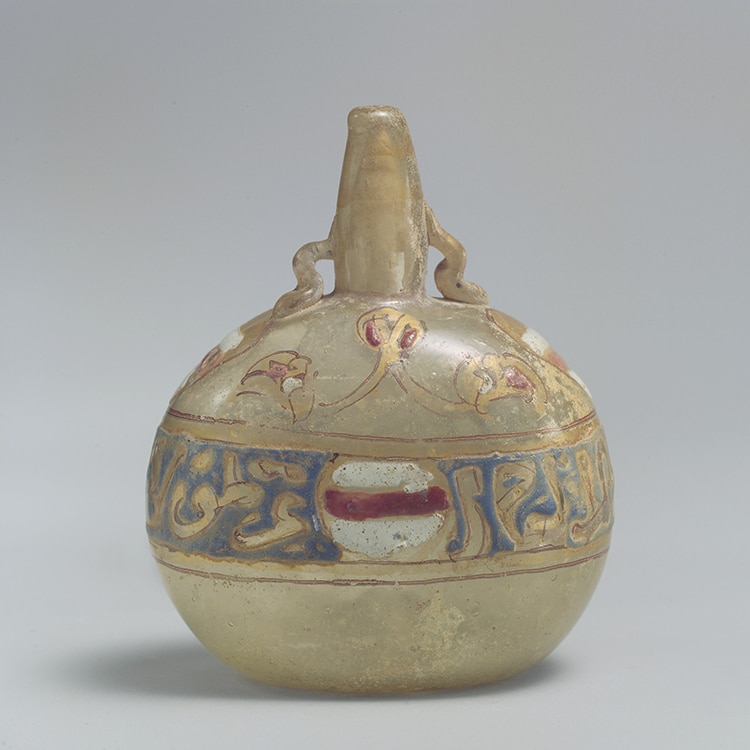 A miniature perfume sprinkler to be worn on the person. This example from late 13th or early 14th century Egypt carries the Fesse Emblem, a mark of the Mamluk sultan. (Photo: The Metropolitan Museum of Art, Public domain)

After the fall of Rome, Europe entered the period often called the Dark Ages. While somewhat of a misnomer, a lot of scientific knowledge was neglected and would only be reinvigorated in the later Renaissance. However, the famous Persian philosopher, astronomer, and physician Ibn Sina (also known as Avicenna, lived 980-1037 CE) developed and publicized a process for distilling floral essential oils. This process was an improvement on older perfumes, in which ingredients were crushed and mixed with oil. A variation of the distillation process articulated by Ibn Sina had also been in use in ancient India likely since around 3000 BCE.

While the Indian and Persian perfume traditions continued to flourish, it would not be until the crusades that European interest in crafting perfume was reignited. Both military and trade voyages to the Holy Land introduced Europeans to the attars (botanical essential oils), particularly a signature distillation of roses. They were also re-exposed to animal-based scents such as musk (secretion coming from the musk deer), civet (from the civet), and ambergris (discharge from sperm whales).

The production of perfumes in Europe took hold in the late Middle Ages. Guilds of perfumers were established to grow (and protect) the budding industry, which was closely nourished by royals and their courts. In the late 14th century, Hungarian court perfumers crafted Hungary Water, a perfume that mixed the traditional aromatic oils with alcohol. The alcohol-based perfume was perfected by the Italians in the 14th century, the liquid aqua mirabilis (marvelous water) was a powerful scented concoction. The need to bottle these luxurious perfumes coincided with the growing Venetian glass industry. 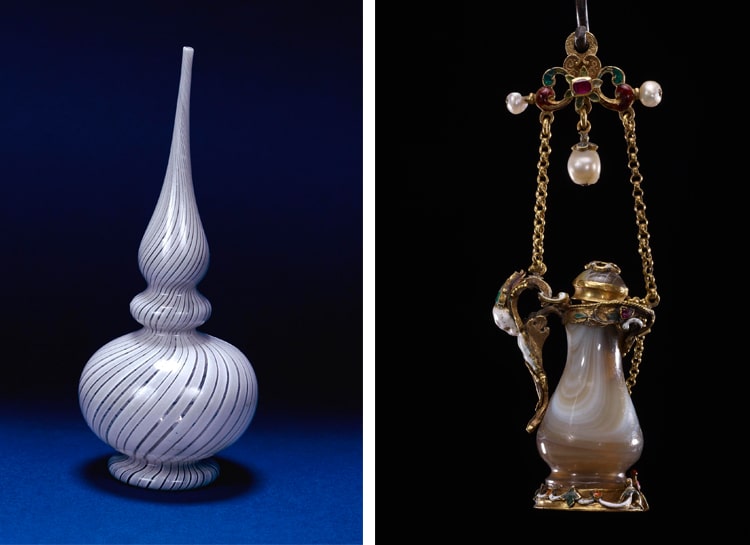 Left: Late 16th-century perfume sprinkler from Venice. | Right: A small scent bottle meant to be worn as a pendant, of agate, gold, and gemstones. This 17th-century bottle was added to in later years. (Photos: © The Trustees of the British Museum, CC BY-NC-SA 4.0)

During the late medieval and Renaissance period, solid perfumes were housed in pomanders and worn on the body, while liquid perfumes were housed in exquisite vials. Venice became known for producing delicate, thin glass vessels in a style known as cristallo (meaning clear glass). This façon de Venise spread around Europe throughout the Renaissance, as both perfumery and glassmaking gained in popularity. In the 16th century, the Italian noblewoman Catherine de Medici became Queen of France, bringing her personal perfumer René the Florentine with her. She set a court fashion of perfumes laden with civet and musk, stimulating French production.

The perfume bottles of the late medieval and Renaissance period demonstrate a reinvigorated luxury and the ever-evolving techniques of artisans. The perfume sprinkler (above) would have been used to scent a room, and it demonstrates a classic Venetian cane-working technique. Perfume bottles could also be much smaller—and like the pomander—worn on the person. The scents of the nobility were often lavishly housed, such as the example in carved agate and gold set with rubies. These personal perfumes were handy in a world where bathing and personal hygiene were not up to modern standards. 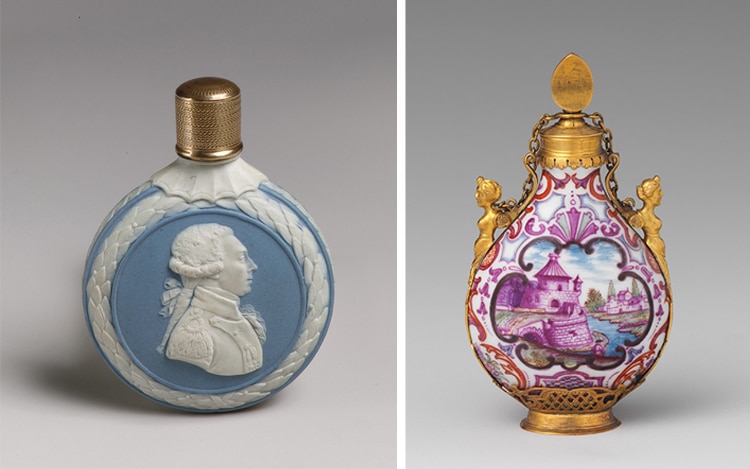 European perfume bottles of the 18th century were heavily influenced by the fashions and artistic movements of the day. Crafted in glass, porcelain, or even white glass masquerading as porcelain, scent bottles were no longer the sole provision of the fabulously wealthy. Global trade and the rise of a European middle class interested in luxury goods meant that commercially-produced perfumes were more widely available to those with disposable income. Borrowing from Neoclassical styles, the scrolls and gilding of Rococo design, and the Romantic pastoral scenes, perfume bottles followed the artists trends of both painters and the decorative arts. Production of perfume vessels was also no longer exclusive to Italy; fine examples could be found in London, Vienna, and other cities. 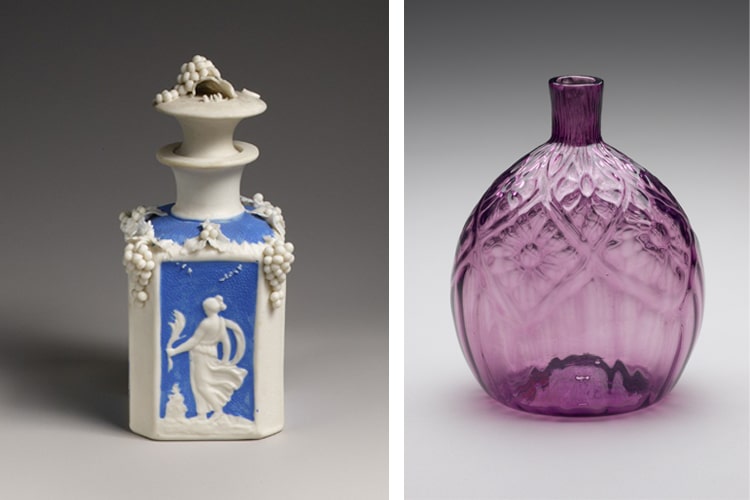 Glasswork came to the American colonies quite early; the first workshop was established at Jamestown in 1608. Domestic production would not match imports until the late 18th century. In the 19th century, mass production was increasingly possible due to the advancement of the Industrial Revolution.

For perfume bottles, Neoclassical designs were popular in Europe, but American consumers were also developing their own unique tastes. These trended towards ornate decoration and cut or molded glass. Jewelers such as Louis Comfort Tiffany created luxury works of art for the most affluent consumers, such as this perfume bottle cut of agate and decorated with gold and sapphires in an Art Nouveau style. 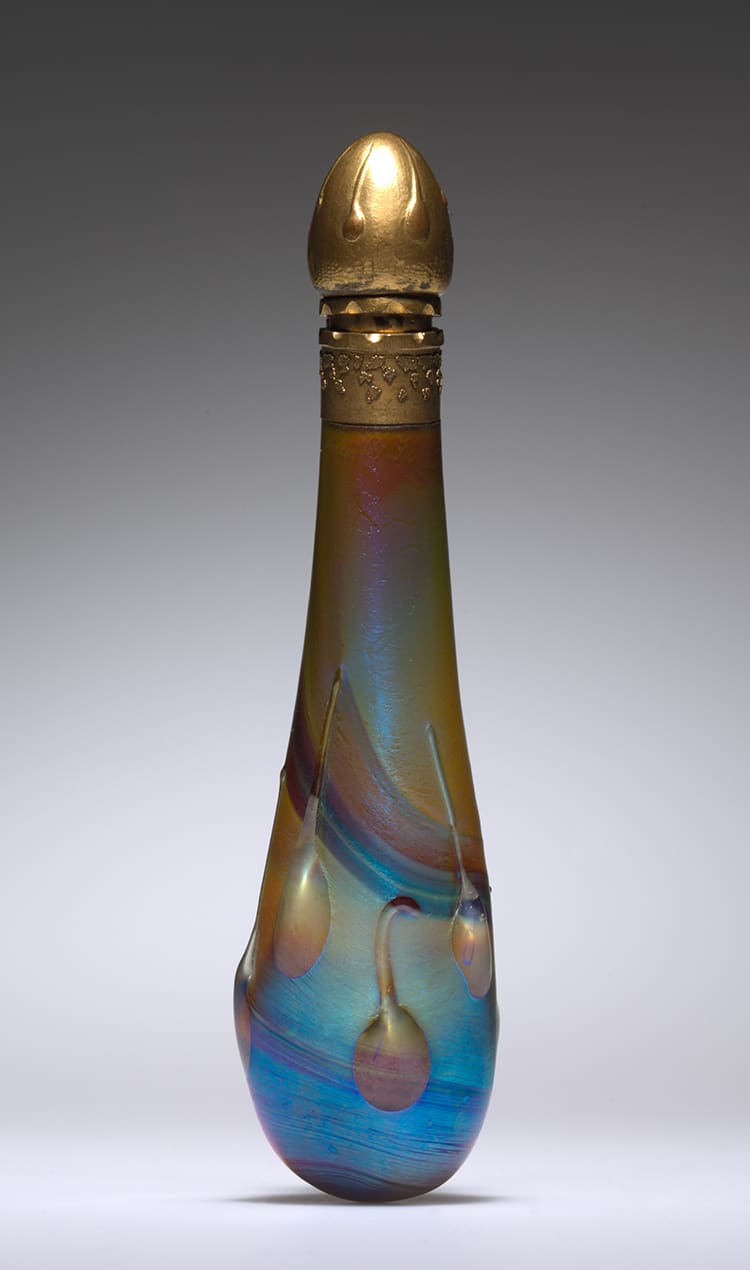 In the 20th century, some of the most famous names in glass and perfume established reputations that hold to this day. French jeweler René Lalique became known for his frosted glass perfume bottles. Many 20th-century perfume bottles featured an atomizer, a late 19th-century invention that produces a fine spray from a liquid. While perfume brands had name recognition in the 19th century, the bottles and brands became identifiable as part of a larger fashion milieu. The perfect example is Chanel No. 5, a fragrance introduced in 1921 by designer Coco Chanel. 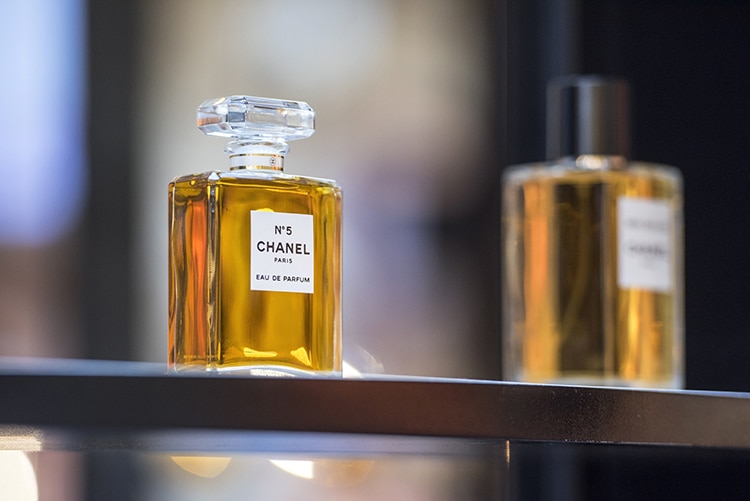 Based on a 1924 design, the Chanel No. 5 was purposefully simple in reaction to the cut-glass works of the likes of Lalique. It was, and still is, clear; the amber-colored liquid is on full display. By the 1930s, smaller sizes were available for the ease of the modern woman on the go. The perfume and its signature bottle remain iconic, from being name-dropped by Marilyn Monroe to cameos in music lyrics today.

Perfume bottles today are heavily branded, unlike the largely anonymous pieces of ancient times. However, with careful product design, the perfume bottle remains a work of art.

What Is Ancient Assyrian Art? Discover the Visual Culture of This Powerful Empire

What Is the Rosetta Stone? Learn the History Behind This Legendary Ancient Artifact

10 Facts About the Parthenon, the Icon of Ancient Greece