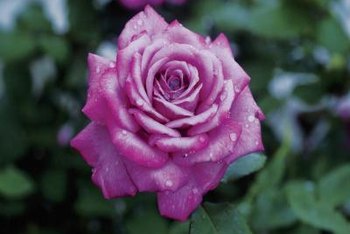 Climbing roses (Rosa spp.) are somewhat deceiving. They don’t climb with tendrils or aerial roots like many vines do. Instead, they produce very long canes that can be secured to support structures or trained to grow along fences. Two climbing roses are commonly called “American Beauty,” but the only aspect they have in common is their climbing habit and common name.

“American Beauty CL” (Rosa “American Beauty CL”) is a once-blooming variety. Although it blooms only once each year, however, its display of flowers is usually quite showy. A hybrid of several cultivars, a mature “American Beauty CL” plant can produce 500 to 1,000 blooms. The flowers are pink and average about 3 1/2 inches in diameter, with about 50 petals on each bloom. This hybrid rose is showy, but it is also fragrant. In fact, you might even notice the plant’s strong, pleasing scent before you even see the flowers.

“American Beauty CL,” as its name implies, was developed by an American. It was introduced in 1909. Hardy in U.S. Department of Agriculture plant hardiness zones 5 through 9, it is desirable for its trouble-free care and ability to thrive even in poor soil. “American Beauty CL,” like most climbing roses, thrives with good air circulation. So if you locate a specimen near a vertical surface such as a wall, position the plant’s support structure at least 3 inches from that surface. Like all roses, “American Beauty CL” grows best in full sunlight and well-drained soil.

“American White Beauty” (Rosa “F.K. Druschki”) is a climbing rose with pink-tinted buds that open to pure white. Also known as “Frau Karl Druschki” and “Snow Queen,” it produces flowers all summer. The blossoms are a bit less heavily ruffled than those of “American Beauty CL,” with each flower carrying about 35 petals. The long, slightly arching canes, which have very few thorns, reach 4 to 6 feet. Unlike “American Beauty CL,” “American White Beauty” has only a faint fragrance.

“American White Beauty” is hardy in USDA zones 5 through 9 and, like “American Beauty CL,” it is a hybrid rose. Introduced at the turn of the 20th century — eight years before “American Beauty CL” — it is a strong, fast-growing variety that tolerates poor soil, just like it’s name-cousin, but is prone to developing mildew if air circulation is poor or if it is not in full sunlight. Like all roses, it prefers rich, well-drained soil and full-sun exposure.